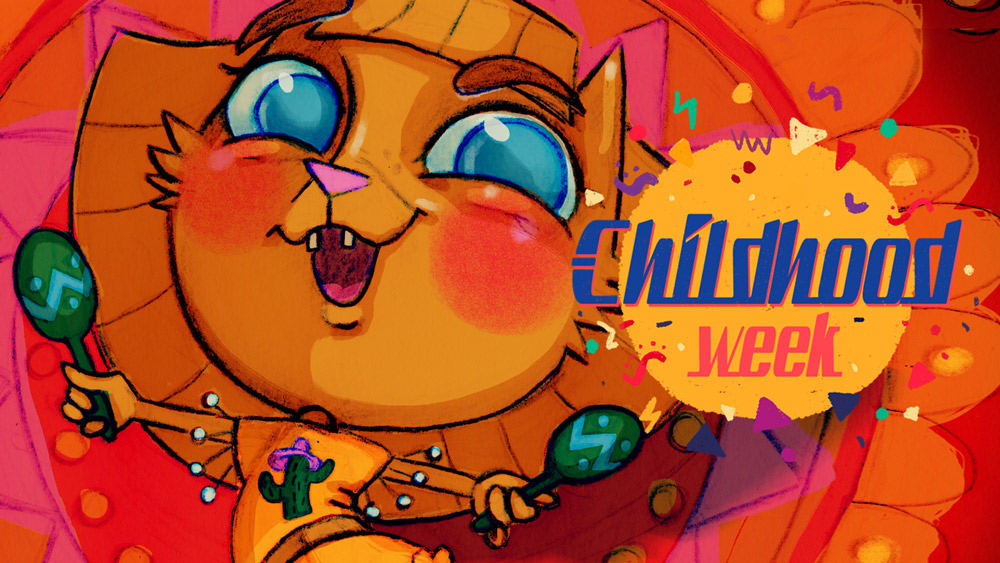 Childhood Week was awesome.  I got five out of the seven prompts done and I’m super pleased with that. I have now brand new illustrations to show you. I’m also going to share the stories that inspired the artworks.

In case you missed it, I talked more about what the Childhood Week is in the previous post.

I decided to draw my self as a lion-cat-person since that is pretty much what I was as a kid. My horoscope is Leo and I’ve always loved cats. I tried to follow our pet cats where ever they went. Sometimes I got stuck but often I just saw the world from a new perspective.

I’m the youngest of four siblings. One day my dad surprised us and had a bought not only ice cream but also colourful ice cream sprinkles. That was superb. But since we all four kids were pretty feisty personas that one bottle of sprinkles got us fighting like cats and dogs. Who got the most and who didn’t get any at all.

Next time my dad bought instead of one bottle, FOUR bottles of sprinkles. He marked each bottle with our name. One for Elli. One for Vilma. One for Ville. And one for Juho.

I was always the first to finish my bottle. Not only because I had a serious sweet tooth but I always shared my sprinkles if my siblings asked. They think they tricked my when they first asked with the left hand if they could get some sprinkles and after that with the right hand. The right hand would be sad if it wouldn’t get any. It wouldn’t be right.

My memory is that I did know what was going on. I just enjoyed the fact they were playing with me and we’re so happy to get some extra sprinkles. No matter how much I liked the sprinkles I liked the feeling of sharing even more.

I’m still the same. What ever I have I use it and share it. Also my siblings are with their possessions as they were when they were kids. Ville is the next to spend his, then Juho and last Vilma – who is a master at saving.

My parent’s are soil engineers and entrepreneurs. Their office was – and still is – downstairs in the same house that we lived in.

That office was my Universe. At least after office hours. Not only it contained endless amounts of art tools (= office supplies) it was also place to practise my circus act: balancing beautifully on the postal tubes. I got pretty good at that, I must say. There was a full crowd in my imaginary audience.

In the image above I want to illustrate how many layers went into creating these illustrations. I first drew the drawings by hand with my blue col-erase pencil. Then I scanned and open it in Photoshop where I first did a simple colour compositions. Then I added shadow, light and detail layers. After adjusting everything to be just right, the illustration was finished. Jey.

I don’t remember what age I was when I found out Hugo Simberg’s paintings. He is a Finnish symbolist painter who lived in the 1800. Every painting of his tells a tale. He has lot of dark themes and humour in his paintings.

My illustration is tribute to his painting The Garden of Death (in the image below). The way he portraits death is very comforting. The skeletons seam fragile and caring. His art was especially important to me to look at when my grandma and my cat Väiski died.

There’s no life without death. It’s not to be scared since it nurtures life.

I based the Tales illustration heavily on the painting Garden of Death. But I didn’t want to copy it exactly. As you can see in the image above not only the characters are different I also changed the positions, flowers and the background to better suit my visual tale.

The first sketch in the up right is the thumbnail sketch. I usually start my artworks by doodling in a very small scale to get the feel of the illustration. Only after I start to work on the final piece.

If you have siblings you know that they are both you’re best friends and your worst enemies when you’re a kid. Since I was the youngest I felt like others were always bullying me. We fought especially lot with my big brother Juho who was only two years older than me.

But our neighbour Ari was kind of third big brother to me. He was “the kind one”. He was my Guardian. Ari tried to cool off the fights between me and brother. When Juho hit me, I got so angry and tried to hit him back. If Ari was playing with us he said: “Hit me instead”, so that the situation would calm down.

I don’t remember if I did hit him. Probably not very hard at least since he was my friend.

He was few years older than us and way more mature. He was the peace maker. I’m not surprised that he’s now an orthodox priest and has a big family of his own. Thank you Ari for always being the extra-big-brother to me.

Sun and childhood together makes me think of our family trip to the sunny New Mexico when I was a 7-years-old. My oldest big brother Ville was graduating from High School there.

The story how Ville graduated from High School in the States is a story of it’s own. He left there as a teen to do exchange studies but decided to fought his way to stay for good. He didn’t even speak English when he left but he learned it quickly. He’s very untypical Finn: super social and laughs a lot. So in the 90’s he felt more at home in the States than in Finland.

Thanks to him the trip was AMAZING! We saw The Gran Canyon, Las Vegas, some very big orange rocks and huge forests and everything. I also fell in love with the food – mostly tacos. Tacos are SO good!

Also this 2-piece yellow outfit is from that trip. It had a Mexican themed prints with cactuses, sombreros, maracas and also fringes and frills. I loved it. I was one of my faves as a kid and that’s why I chose to use that one for all of the Childhood Week illustrations.

Thank you for accompanying me to my childhood memory lane. I also added these illustrations to my brand new INPRINT shop if you’re interested to get some postcards or gallery-quality giclée art prints. It’s absolutely the best way to support me as an artist. You get a beautiful print and I get affirmations that I should keep on making happy-go-lucky art. See you next Tuesday.

“The creative adult is the child who survived.” -Ursula Leguin