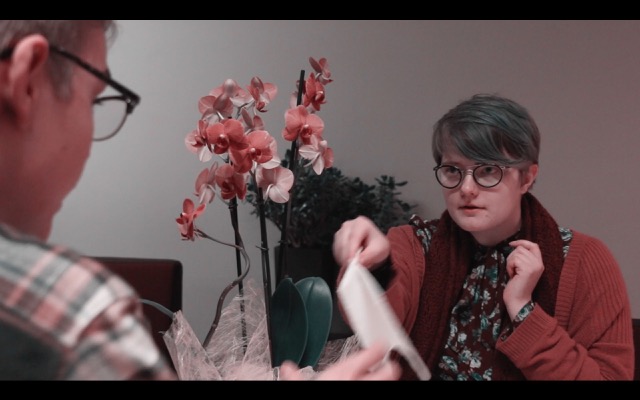 As a reminder I’m a freshman in Turku University of Applied Sciences majoring in animation and film. We had last day of school for the semester last Thursday. One of the most inspiring courses of this Autumn was about live-movie-directing with film director Marja Pyykkö known for e.g. from movies Sisko tahtoisin jäädä and tv-series Mustat lesket. We had intensive 5-days with her. During which all students wrote and directed a 2-3 minutes long scenes with dialogue for two people. I also worked as a cinematographer in one scene and acted in 4 scenes by my class mates.

My scene was the beginning scene for a movie Me emme ole täältä (in English: We are not from here) which I’ll write from start to end some day. The original idea for the movie I created for the photography course’s poster task. The script has some Twin Peaks inspired vibes. It’s on the soft side of the Nordic Noir. For now I only have this first scene written but my classmate was so inspired by my presentation that he asked if he could co-write the final script with me.

Below are screenshots from the scene. The 1st scene takes place in a gas station of a silent Finnish town where a strange girl called Rara arrives with her pet orchid. A cute local nerd Kommi wants to protect the newcomer but just makes the situation socially awkward. As actors I had my talented class mates Anton Lipasti as Kommi and Aino Eronen as Rara. They truly made the script come alive. Eetu Helenius worked as the trusted cinematographer. The scene stills need some fine tuning in the editing department but here you get a sneak peek. I’ll keep you posted on the future developments of the project.